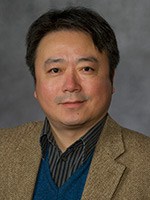 Research interests: Renal mechanisms of hypertension and molecular mechanisms mediating the progression of chronic kidney diseases.
Renal sphingolipids in sodium excretion blood pressure regulation. Sphingolipids were originally thought to serve as silent structural elements of the cell membrane. Recently, sphingolipid metabolites are emerging as important lipid signaling molecules. Among them, sphingosine-1- phosphate (S1P) is known to play important roles in cellular processes in various organ systems including the cardiovascular system and kidney. Five members of the S1P receptor family (S1PR1–S1PR5) have been identified. The S1PR1-3 are present in the kidneys. We have recently demonstrated that S1P1-3 receptors are prominently expressed in the renal medulla, mainly located in the collecting ducts, and that S1PR1 receptor in the renal medulla mediates a strong natriuretic effect via inhibiting epithelial Na+ channel (ENaC). Our data have shown that renal S1P receptors and its producing enzymes respond to high salt intake and that there are defects in S1P pathway in salt-sensitive hypertensive models. Interestingly, manipulation in this pathway attenuates salt-sensitive hypertension in animal models. The hypothesis to be tested is that the renal S1P pathway is a critical counterbalancing mechanism to inhibit the excessive Na+ reabsorption and that suppression of renal S1P pathway contributes to the development of salt-sensitive hypertension.

Molecular mechanism of hypertension-induced renal injury: the role of hypoxia inducible factor-1α. Hypoxia inducible factor (HIF)-1α is a transcription factor that has been shown to be up-regulated in almost all types of chronic kidney diseases (CKD). HIF-1α stimulates the collagen accumulation by activating fibrogenic factors. There is evidence suggesting that the long-term activation of HIF-1α is injurious in CKD, although upregulation of HIF-1α is protective in acute kidney injury. The coexistent hypertension plays a predominant role in the progression of CKD. Despite the findings that impaired renal autoregulation transmits the elevated renal perfusion pressure (RPP) into the renal microvasculature, causing RPP-induced renal injury in CKD, little is known regarding the molecular mechanism mediating RPP-induced injury. Our preliminary data showed that silencing of HIF-1α attenuated renal injury without effect on hypertension in a rat 5/6 renal ablation/infarction model (5/6 A/I); maintaining a normal RPP blocked the increase of renal HIF-1α and suppressed the renal injury in this CKD model, indicating that HIF-1α may mediate RPP-induced renal injury. HIF prolyl- hydroxylases (prolyl hydroxylase domain-containing proteins, PHDs) are the major enzymes to promote the degradation of HIF-1α and present in the kidneys to regulate renal HIF-1α. We recently showed that PHDs play a critical role in TGF-β- and ANG II-induced activation of HIF-1α and consequent injuries in renal cells. Further, the PHD activity is inhibited by the activation of TRPC6, a member of the Transient Receptor Potential Channels. The activation of TRPC6 is known to produce renal injury. Moreover, TRPC6 participates in the mechanical/pressure sensation in various cell types, including podocytes. Therefore, TRPC6 may be the upstream mediator that transmits the RPP stress into downstream molecular pathways to cause RPP-induced injury. The hypothesis to be tested is that the elevated RPP activates TRPC6, which inhibits PHD activity to induce HIF-1α- mediated profibrogenic genes, consequently causing renal injuries in CKD.