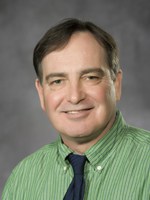 Research in my laboratory focuses on the mechanism of action of G-protein-coupled receptors, especially those that mediate the effects of psychoactive drugs, such as opiates, cannabinoids and antidepressants. Recent studies also have begun to examine the effects of ethanol on G-protein-coupled receptor action in the central nervous system. Molecular and biochemical techniques are used to study several issues related to G-protein-mediated signal transduction and psychoactive drug action in both rodent brain and cell culture models. Major projects examine the molecular mechanisms underlying opioid and cannabinoid agonist efficacy, opioid and cannabinoid tolerance and dependence, efficacy and chronic effects of antidepressant/anxiolytic drugs, and involvement of G-protein-coupled receptors in ethanol intoxication and dependence.

G-protein activation by receptors can be measured directly using [35S]GTPgS-binding and low-Km GTPase assays. We have found that agonist efficacy correlates with several parameters of G-protein activation. Different G proteins modulate the activity of various effectors, such as adenylyl cyclase, phospholipase C and ion channel activity, which also can be measured directly. Because receptors typically couple to multiple G-proteins, different agonists may selectively activate different arms of the signal transduction pathway. This possibility can be tested using cell lines that have been selectively transfected to over-express specific G-protein subunits. Determining the selectivity of agonist-stimulated receptor signaling may lead to the development of drug therapies that maximize medicinal effects while minimizing unwanted side effects.

Chronic administration of drugs can lead to both desirable and undesirable long-term effects. Tolerance to and dependence on opiates is a major problem for both drug-addicted individuals and those who must take opiate pain medication for long time periods. On the other hand, some drugs, such as antidepressants and atypical anxiolytics, must be taken for several days to weeks in order produce a beneficial effect. Various drugs (opiates, cannabinoids, alcohol and buspirone) have been found to produce differential changes in the ability of receptors to activate G-proteins in different brain regions. Some produce widespread profound alterations, whereas others produce small changes confined to specific brain areas. The mechanisms underlying these chronic drug effects, and how they correlate with behavioral and physiological aspects of chronic drug action in animals, is being studied in numerous collaborative projects. In addition, cultured cell lines are being used in our laboratory to study these chronic drug effects in defined cellular systems