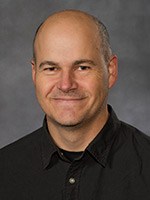 I use the free-living nematode and powerful model genetic organism Caenorhabditis elegans to identify molecular targets of drugs and to better understand the response of the nervous system to the presence of these drugs. In particular I have focused on the effects of alcohol on the nervous system. As occurs with humans, C. elegans display dose-dependent alterations in behaviors when intoxicated by alcohol. By concentrating on the depressive effects of alcohol, I have been able to identify multiple genetic mutants that display altered sensitivity to the behavioral effects of alcohol. Several of the identified mutations affect a single gene, slo-1, that encodes the C. elegans voltage and calcium-dependent large conductance potassium (BK) channel. Electrophysiology and further genetic studies showed that alcohol appears to activate the slo-1 potassium channel, an action that would result in decreased neuronal activity and could explain aspects of the behavioral depression associated with alcohol intoxication. I am continuing to use C. elegans genetics to identify other molecular targets of alcohol. The identification of genes that mediate alcohol’s effects in C. elegans will provide candidates for genes that play similar roles in humans. Genes that affect an individual’s acute sensitivity to the drug may be important in predisposing an individual to alcoholism because there is a strong correlation between a naïve drinker’s level of tolerance to alcohol and their likelihood of abusing alcohol later in life.

Further, I am examining the response of the nervous system to alcohol. The nervous system is not a static target; homeostasis within the nervous system attempts to maintain normal levels of function even in the presence of alcohol. One way to examine the changes occurring in the nervous system during an exposure to alcohol is to examine animals that have recently been withdrawn from prolonged exposure to alcohol. With C. elegans, such animals demonstrate behavior that is distinct from their untreated and intoxicated behaviors. It is likely that the removal of alcohol from their system has uncovered the compensatory physiological changes that have occurred in the nervous system to cope with the presence of the alcohol. One of those changes appears to involve the npr-1 gene or the pathway in which the gene acts, suggesting that regulation of that pathway is occurring during prolonged alcohol exposure. The identification of other pathways that are regulated during alcohol exposure may provide key insights into the mechanism of tolerance, including a better understanding of the chronic alcohol tolerance that develops during the development of alcoholism in humans.

Finally, the approach of using C. elegans to better understand the targets of alcohol that mediate the behavioral effects of the drug can be applied to other drugs and compounds.